Use the latest Bull3D technology to understand and help improve your putting.

Watch it in action

Bull3D is also fully available and incorporated into putting and short game. Providing unique club data which is extremely influential on putting and short game (as it is with all shots in golf), alongside how the golfer is moving throughout the stroke/shot allows for a fully cohesive and embracing approach in understanding how the player and club move and interact to produce the outcomes observed. The Bull3D system is fully portable and useable inside and out therefore allowing for full 3D biomechanical putting and short game assessment to be done on the putting green/short game (including bunkers) areas rather than in the more often clinical studio based approach. this allows for full interaction with the environment the player invariably performs within, this allows for a much more realistic and representative approach to putting/short game as areas such as the grass, slopes, lies, temperature/wind/ambient light etc which can be very influential on outcome.

Also, we can locate putter/wedge variability therefore allowing you to understand why you experience certain ‘misses’ and precisely what changed between ‘holed’ vs. ‘missed’ putts. 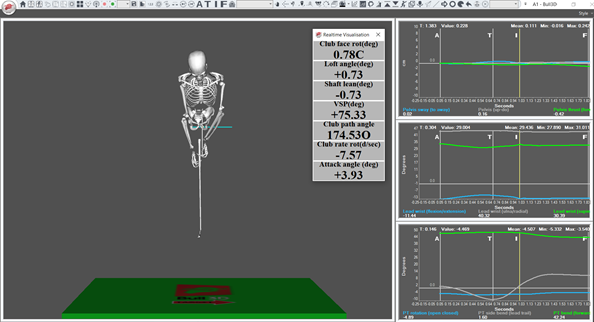